Towards Evenings, My Heart by Chen Zhe 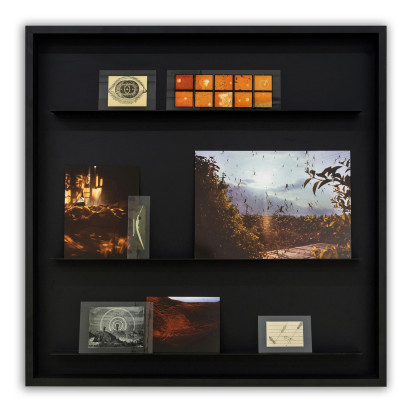 Galleri Image presents the exhibition Towards evenings, My Heart by the Chinese artist Chen Zhe, which is curated by Yining He. It will be shown at Galleri Image from 21 October until 18 December 2022.

For the first time in Europe, the exhibition will present selected works from Chen Zhe’s Towards Evenings, an ongoing quest for the nebulous space between day and night, light and twilight, the known and the unknown, spanning 10 years from 2012 to the present.

With a particular focus on the tension between reading and viewing, the series draws inspiration from literary and visual materials across time and cultures. While the chapters stand independently, they also interact with each other and constitute a network of human experiences that center on the intricate and transient time of the dusk. Three of the six chapters in this series are already in progress: “The Uneven Time（非均质的时间)”, “Nightfall Disquiet (向晚意不适)”, and “The Red Cocoon (赤之茧)”. In these chapters, Chen Zhe explores the visual and linguistic textuality of the temporality of dusk, the unsettling body-mind experience that the dusk brings, and the irreconcilable conflict between freedom and belonging at the magic hour.

The Chinese phrase xiangwan 向晚 (“towards evening”) refers to the time when the sun is about to set. It not only alludes to uncertainty and transience but also appears in classical poetry as a metaphor for decline and an expression of melancholy. In this carefully selected space, we invite the viewer to join us in a dialogue between text and image, time, and space, and to step into the "synchronic"[1] universe constructed by the artist, where a constant dialogue between body-mind-spirit takes place.

[1] According to Chinese philosopher Zhao Tingyang, “Time, although one-dimensional, is elastic, able to open up and 'synchronically' contain a multitude of objects, so that synchronicity can explain the inherent spatiality of the non-spatiality that time opens up. However, it is not an actual extension but a logical spatiality but is sufficient to explain how a world without extension can exist in consciousness.

Events
The exhibition will be accompanied by presentations with the artist and curator as well as panel discussions and tours. In connection with the exhibition, we invited Chen Zhe to an artist residency in hopes of realizing a public sculpture. More information to follow.

About the Artist
Chen Zhe (b. 1989) lives and works in Beijing, China. and holds a degree in Photography and Imaging from the Art Center College of Design, Los Angeles. Her works have been shown at biennials and museums around the world, including China, Japan, Germany, Norway and Australia. She has received a number of prestigious awards including the Foam Talent (2018), the Xitek New Talent Award (2015) and the Lianzhou Festival Photographer of the Year Award (2012). Chen Zhe's controversial release "Bees & the Bearable" was awarded Best Photobook of the Year at the Kassel Photobook Festival in 2016.
Read more about the artist on her website: https://zheis.com/

About the Curator
The exhibition is curated by Yining He (b. 1986), a Chinese curator and researcher focusing on contemporary photographic art, educated at the London College of Communication, University of the Arts London.
Read more about the curator on her website: http://www.heyining.com/

The exhibition is supported by the Danish Art Foundation, the Augustinus Foundation and the S. C. Van Foundation.

Photo credit: Chen Zhe: The Only Question is How to Endure: Immersing (2017)，from the series Towards Evenings, since 2012.