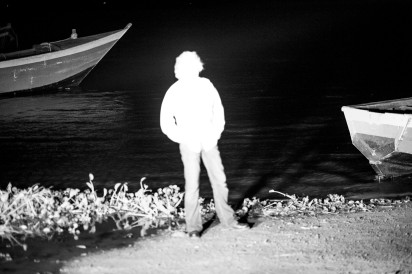 Concurrent is an exhibition of two South African photographers’ work: Jansen van Staden and Thembinkosi Hlatshwayo. Their work deals with the complexities of family relationships and places, legacies of violence, and the possibilities of transformation that photography holds. It bears the entanglement of histories of Apartheid and colonialism in the present, but also about practices of transition and countering.

Both photographers use the complex rituals of documentary practice to tell their stories, and at the same time, to process these events: rethinking and repositioning them. It deals with the multiplicity of the medium and its rituals that unfold - that photography is not just the moment of making the image, but a complex set of engagements that accumulatively become a mode of meaning-making. A current of many streams.

In Microlight, Van Staden’s search starts at an end: the death of his father. He searches back in time - the connections that his father had with family; the artefacts of history at museums and in homes and family albums, to understand the traces of the origins of how the ideologies of apartheid manifested in the South African Border War that disrupted his father’s life at the age of conscription, 17. Much of his work deals with the traumas that now have become intergenerationally entangled. His narratives are tapestries of anecdotes, small things that make bigger pictures.

Slaghuis II, is Thembinkosi Hlatshwayo’s response to the growing up in a home, that was also a tavern. Marked by the violence that is associated by his experiences, he now transforms the original spaces of home and tavern into his studio, taking up violence as a visual language. Hlatshwayo’s exploration has become one of working and reworking of photographs, as images, as objects, as textures, ripped and rephotographed after they were exposed to the conditions of the tavern. His performances become a retrace of memories - of interacting with the camera, of private re-enactments. Both photographers are thinking of the place of documentary photography and its practice – as experiment, as position. One, that allows photography to erase histories while writing them.

Jansen van Staden
Jansen van Staden (b. 1986) is a South African photographer based in Cape Town. Van Staden uses photography as a conceptual entry point to reflect on personal imaginaries and social constructs of belonging and disconnect. He uses personal anecdotes and images of chance to construct narratives about the complexities of contemporary South Africa. He was awarded the Charta Dummy Book award in 2021 (Rome) and his work was exhibited in “If a Tree falls in a Forest” at the Rencontres d’Arles 2021.
jansenvanstaden.com

Thembinkosi Hlatshwayo
Thembinkosi Hlatshwayo (b. 1993) is a South African photographer based in Johannesburg. His work deals with themes of first-hand and generational trauma, violence and memory. He is interested in the materiality of photographs. He was awarded the 2019 CAP Prize for Contemporary African Photography. His work was exhibited in “Before the night” in Fotomuseum Winterthur (2019).
thembinkosihlatshwayo.onfotomat.com

John Fleetwood
John Fleetwood (b. 1970, Johannesburg) is a South African photography curator and educator. He directs Photo: a platform, based in Johannesburg that develops and promotes socially relevant photography projects and is the co-head of BA Photography at the Royal College of Art (KABK), The Hague, The Netherlands. From 2002-2015 Fleetwood was the director of the Market Photo Workshop, Johannesburg. He is the convenor and founder of the Centres of Learning for Photography in Africa.
He recently curated ‘Intimacy and Resistance: An intergenerational dialogue on South African photobooks’, Photobook Week Aarhus (Denmark 2020), ‘Five Photographers: A tribute to David Goldblatt’ (incl. Johannesburg, Bamako, Maputo, Durban, 2018-2019) and ‘Of traps and tropes’ as part of Kerkennah International Photography Festival (Tunisia, 2018). In 2017, he was guest editor for Aperture’s Platform Africa edition.
www.phototool.co.za


SEMINAR
In conjunction with the exhibition, Galleri Image will present a seminar from 1-3 pm on 29 September 2022 about South African art with the artists, curator and Jacob Lund, Associate Professor at the dept. of Aesthetics and Culture, Aarhus University. In his research, Jacob Lund has worked with several of the themes in the exhibition as well as South African contemporary art specifically. The seminar will be moderated by Judith Schwarzbart and will take place at Jutland art Academy, Mejlgade 32, 8000 Aarhus C


The exhibition is supported by the Augustinus Foundation, the Danish Arts Foundation and City of Aarhus (Kulturudviklingspuljen).